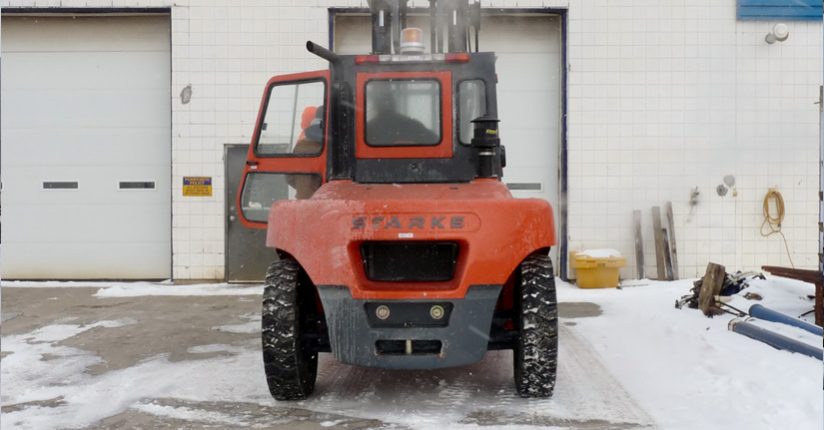 Nothing exposes inadequate forklift maintenance like the sub-zero temperatures encountered during the winter months.  Once the temperature drops below freezing, an improperly maintained forklift will suffer from a variety of fuel-related issues including faulty starts, stalling, inconsistent power output and excessive downtime. To avoid these issues and keep your forklift in peak operating conditions, make sure you prepare your forklift for the coming freeze with this winter maintenance checklist:

When temperatures drop below freezing, LPG fuel systems are vulnerable to a number of issues related to formation of ice. Among the most susceptible components are the fuel regulator and the vaporizer, where an accumulation of ice crystals can reduce the flow of fuel to the engine, making it more difficult to start the engine, reducing power or stopping the engine from operating altogether.

To prevent these issues, guard against temperature extremes by testing the heating and cooling systems – making repairs where necessary.  Begin by conducting a pressure test on both systems, keeping an eye out for leaks in the hoses, radiator, water pump and fuel system. With the cooling system, also check anti-freeze levels, concentration and pH while making sure to bleed any air from the system as this cause the regulator to freeze up.  For the heating system, pay particular attention to the hoses leading up to the vaporizer, making sure the hoses are in good condition and obstruction-free. To make sure both systems run efficiently, test your thermostat to make sure it operates properly as a malfunctioning thermostat will cause the engine to run cold and allow the vaporizer to freeze up.

Beyond the accumulation of ice, liquid propane is also more susceptible to a buildup of tar in colder temperatures as fuel additives condense out of the fuel mixture. A buildup of gunk is most likely to occur in the fuel regulator, so be sure to regularly inspect, clean and/or replace the regulator throughout the winter months.

When compared to either LPG or gasoline, diesel fuel is particularly sensitive to colder temperatures and causes a number of issues with the fuel delivery system.  As a result of its higher freezing point, diesel fuel is prone to waxing or gelling as solid wax particles begin to form and give the fuel a cloudy appearance.  These wax particles cause the diesel fuel to thicken and take on a gel-like consistency, which can clog fuel filters and injectors, ultimately cutting off the engine’s fuel supply.

Fortunately, most of the temperature-related issues surrounding diesel fuel are relatively easy to address. To prevent the formation of wax particles, make sure to fill your forklifts with a class of diesel fuel capable of handling your expected temperature lows without gelling and use a high quality fuel additive to clean out clogged fuel filters and injectors. To further combat the harmful effects of colder temperatures on diesel fuel, it’s also a good idea to inspect, test and replace (if necessary) your glow plugs and essential heaters (oil pan, engine block and manifold) to make sure they provide enough warmth to start the engine on cold winter mornings.

Diesel fuel also suffers from a propensity to absorb and store water in solution.  When the diesel fuel is heated up by the engine before combustion, the absorbed water turns into water vapour and condenses, where it can form ice crystals.  This is problematic as these ice crystals can contribute to corrosion damage within the engine as well as plug fuel lines and filters.  As such, it’s important that you regularly drain your water separator and make all fuel caps fit tightly to prevent ambient moisture from entering the tank.